The Issue
The existing school was designed and constructed in 2004 and is a two storey steel framed building with a concrete slab on grade at ground floor and suspended concrete slab at first floor level. At first floor level an exposed concrete deck wraps around the classroom blocks. This decking has a steel handrail barrier along the slab edge leading to precast concrete stairs to ground floor level. It was evident that steel corrosion was an issue in a number of areas; Hand railing corrosion was apparent at site welded connections along the hand railing.

These connections have been patched up using zinc spray numerous times over the years by the school caretaker. It appears that site welding the connection during the time of construction was not patched up to the correct specification to meet the galvanising specification. The stair infill mesh had minor to major corrosion, and the first floor concrete deck support beams also showed evidence of localised corrosion. Corrosion spots were visible where the flat slab is supported of a beam flange. Evidence of minor corrosion was also observed in the cladding panels. Minor corrosion was observed under the underside of guttering. Finally the Overhanging Purlins showed signs of corrosion. It was recommend that remedial works were carried out in all of these areas to prevent further corrosion taking place.

The fix
It was a fundamental principle that the contractor take responsibility for the overall project including establishing and maintaining an appropriate programme of works, quality control and supervision of costs.

All areas of corrosion needed to be cleaned to bare steel and treated to prevent any future corrosion occurring. They were thoroughly wire-brushed and a zinc wire spray component was applied at the manufacturers specified film thickness. A top coat of 'galvanizing spray' was then applied to achieve a suitable colour match.

To repair the first floor deck beams the first requirement was to cut the concrete away from the beam to allow access to the corrosion. The corrosion was then treated and a bead of speciailised silicon was applied to make good. The corroded facia flashings were measured, remanufactured and replaced with new flashings.

Safety was foremost at this project and Infratel used MEWP’s to complete the work safely.

< Back to
Insert Image: 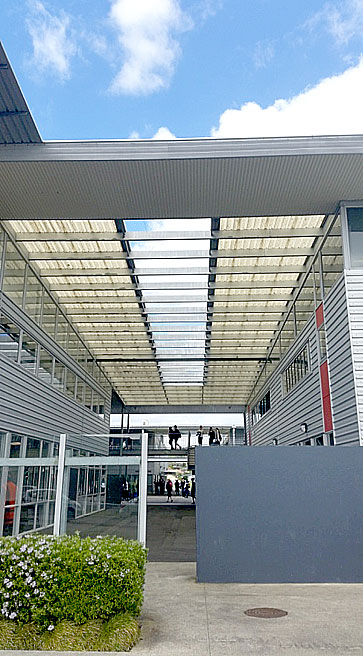